Welcome!
Close
Would you like to make this site your homepage? It's fast and easy...
Yes, Please make this my home page!
No Thanks
Don't show this to me again.
Close
OLD ORCHARD BEACH AIRFIELD 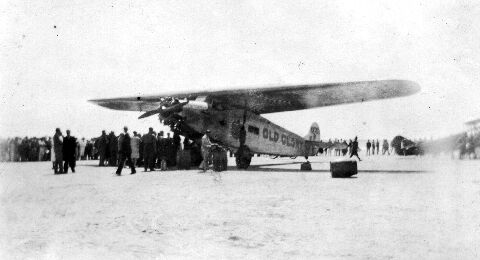 The Fokker VIIA "Old Glory", at the Old Orchard Beach airfield, the day before its attempted transatlantic flight, in September 1927.

The Old Orchard Beach airfield was a strip of beach, in Saco Bay, along the coast of Old Orchard Beach, Maine that had a useable runway at low tide and was officially established on August 11, 1921, by the town of Old Orchard Beach, which was named for the apple orchards that once stood on the hill overlooking the beach. It had a hangar owned by Harry Jones, who was an aviator that had been flying since 1912, and it was used as the starting point for the attempted transatlantic flight of the Fokker VII Old Glory, flown by James DeWitt Hill and Lloyd W. Bertaudon, on September 6, 1927, and the three aborted transatlantic flights of the Sikorsky S-38 Dawn, piloted by Wilmer Stulz, in October 1927,(1) including one on October 23rd.(2) Both aircraft, however, were lost over the Atlantic Ocean.

A successful transatlantic flight was made from the Old Orchard Beach airfield, when French aviators Jean Assolant, Rene Lefevre, and Armeno Lotti flew their Bernard 191 G.R. Oiseau Canari (Yellow Bird) monoplane, with 22-year-old Arthur Schreiber, as a stowaway, 3,418 miles, non-stop, to a beach at Comillas, about 25 miles from Santander, Spain, in about 30 hours, from June 13-14, 1929. This was the first French non-stop transatlantic flight and despite the added weight of the stowaway, which forced them to dump fuel and change their original destination, from the Le Bourget airport, at Paris, France, and almost caused them to crash into a seawall, on takeoff,(3) they still set transatlantic flight records for speed and distance.

An unsuccessful transatlantic flight was also attempted, from the Old Orchard Beach airfield, on June 13th, by the Bellanca J Green Flash monoplane, with registration number NX5315, which was flown by Roger Quincy Williams, as pilot, and Lewis Alonzo Yancey, as navigator. It attempted to take off, for Rome, Italy, just behind the Bernard 191 G.R. Oiseau Canari, but one of its wheels collapsed, forcing it to abandon its flight. Its aviators, however, were successful on another transatlantic flight, from the airfield, to Santander, Spain, and then Rome, on July 9th, 1929, using the Bellanca J Pathfinder monoplane, with registration number NX3789.

The Old Orchard Beach airfield was also visited by transatlantic flyer Charles Lindbergh and his Ryan Ryan B-1 Brougham NYP Spirit of St. Louis on July 24, 1927, during his 1927 tour of American cities, after he could not land in Portland, Maine, because of fog. The Friendship Motor Inn, built in 1970, on East Grand Avenue, near Ladd Avenue, now occupies the site of Harry Jones' hangar, at the airfield.